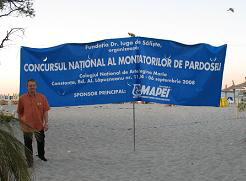 From the 3.9. to the 6.9.2008 the first national Romanian floor laying contest in Constanta at the black sea took place. 10 teams participated in the contest to messure themselves with different floorings and techniques.

Each team consisted of 3 layers and one team leader, who was only allowed to give instructions. In the 10 boxes with the measurements 4,20 x 3,75 m there were 4 rooms, which had to be layed differently.

Room 1:
Linoleum with insidefries and hollow skirting board

Room 3:
Suedes with three narrow insidefries, including a step with metal stair edge

The teams had three days each four hours to finish their work. They were completely free in work execution and their choice of tools. The numerous visitors and jurors could see different floor laying techniques. Despite often simple ways of working all teams produced respectable results.

The contest works were prepared by EUFA-President Heinz Brehm, by Josef Heller, teacher at the state vocational school Neustadt an der Aisch, and by Jörg Schülein, FGL-Chairman of Innung Mittel- und Oberfranken. Meanwhile all three could participate as guests and jurors. The local organisation was done by the experienced consultant Marius Filipascu, by Puiu Cadar and by Bobby Bodor. They have prepared the boxes and picked up the laying material from the sponsors.

Marius Filipascu prepared the contest very well. Journal, radio and TV were there to report daily. Highlight was a one-hour conversation from Radio Neptun, that has been broadcasted live. During this conversation Marius Filipascu and Jörg Schülein could talk about the education in Germany, about the aims of the contest and about the future of parquet- and floor-laying education in Romania and also inform the listeners sufficiently.

The romanian participants prooved, that they have appropriated a high level of laying-techniques. The experiences of the contest created the wish to find ways for the education and further education of parquet- and floor-layers in Romania.

Marius Filipascu has made some advances for the realisation of these wishes. He organized for three romanian professionals a teacher education at the state vocational school Neustadt an der Aisch for multiple weeks. In June this year he visited the same school for five days with a group of entrepreneurs and sponsors to get to know the school and operational education as well as the auditing better.

For a contest on a special floor Marius Filipascu called the participants, sponsors and jurors to the beach of the black sea in late afternoon. There has been a football tournament in the sand. The deep sand required very special techniques, that challenged some younger and some older players to respectable performances.

The german guests could feel very well in Romania. They could experience the generosity and openness of their hosts. The highlight of this was a feast of fish from the black sea.