The association of polish parquet layers organised, like in previous years, at the Budma fair 2015 in Poznan a wide event program for the floor industry. At the contest many, for the parquet industry significant producers of chemical substances (adhesives, paints, primer,...), machines and tools, parquet, strips, service-companies (parquet layer companies), outstanding speakers and contest participants took part in the new form MASTER+APPRENTICE. All of it in great interest by the press, the TV, trade portals and the visiters. Seminars and thematic training, demonstrations - for experts of parquet and floor laying technique - modern technologues and materials, modern equipment, measuring technology, law- and marketing service of the customers, market information, vocational training in an binary system, work safety und for the visiters - consultation by masters of the parquet laying art.

But first one after the other...

The most important event was the INTERNATIONAL POLISH CONTEST OF PARQUET LAYERS in new form: MASTER AND APPRENTICE.

The two days lasting contest was won by the german team Daniel Schrall and Wunibald Schrall (father and son). Their design with the measurements 1100x1100 mm wasn't only more varied and technically more difficult, it was also layed perfectly.

The numerous fair audience chose the attractive design of Krzysztof and Jarosław Ratke as their favorite, which was appreciated by the jury with the second price.

The third place was given to the duo Marian and Martin Hulec from Czech Republic.

At the festive award gala the minister of education Joanna Kluzik-Rostkowska and the chairman of the association of polish crafting Jerzy Bartnik were present, and handed over the special price - the cup for the best master-and-apprentice-team - which was donated by Jacek Tomczak, the chairman of  the training committee of the chamber of commerce, and the seconded in the Sejm of the polish republic.

- The designs prepared by the competitors consisted of umpteen elements of natural oak, merbau and white-ash-tree.

The international arbitration committee, which was led by Josef Heller - a member of EUFA P+F - evaluated in his assassment following:

Organisation of the work place, order, observance of work safety measures, currency of the parquet layer art, precisement of the cuts, measurements and line layouts of the design, attachement and durability of the layed design, care and claenliness, production time, difficulty of the design, design and the final result of course.

Special attention should be given to the extensive program of presentations which were prepared as part of the floor zone (details of the programs at www.parkieciarzepolscy.com.pl ).

In the zone of the by the association of the polish parquet layers organised events there were besides emotions while cheering on the competitors and the during lectures presented knowledge, also the chance to recieve detailled information of representatives of commercial companies, which sponsored the contest and the other events.

The institutional patronage of the contest took: PIGPD, ITD, the association of polish business - the trade chamber for the voivodeship

wielkopolskie, the polish industry- and trade chamber for construction industry.

Besides the contest the by the trade chamber for the voivodeship wielkopolskie organised conference ( with the professional participation of the association of polish parquet layers) took place with participation of the minister of education Joanna Kluzik-Rostkowska: „Fach w rękach. Rola samorządu gospodarczego w kształceniu zawodowym.” ( Having the subject in hand. The roll of the economic self-administration in the vocational training.) The honor patronage of the conference was taken by Bronisław Komorowski, president of the Republic Poland.

As summary of the events and the presence of the flooring business at the Budma 2015, Dariusz Kozera, chairman of the association „polish parquet layers“ expressed following ideas:

The Budma 2015, the largest construction industry meeting in central and east europe is an outstanding plenum for the promotion of the professional parquet layer being and the whole floor industry. This year we organized an event with an extremely large event program. The essential and most important aim was the promotion of the professional parquet layer being. But we as self-administration of the parquet industry want to promote the effort of the ministry of education, of the trade association and the vocational training committee at the national economic chamber to rebuild the binary education system in the job and so we chose the new form master and apprentice. I am happy that outstanding, experienced experts and their younger apprentices came and presented the excellent art of parquet laying. An enormous doing like that wouldn't be possible without the support of our reliable sponsors, which I don't just want to thank for their financial support, but also for their enormous personal commitment. I want to thank especially the company Domalux Profesional - the general sponsor - and the company Mafell, that organized the machines the competitors worked with and for who it was a big logistic challenge.

I also want to thank Heinz Brehm and Josef Heller from EUFA for their organizational support.

We couldn't have organized this big business event without the goodwill of the board of the international fair Poznań and their constructive cooperation and the commitment of the management of the Budma team, Mr Director Dariusz Muślewski and Mrs Violetta Pastwa, also Mrs Anna Bąblińska - for what I thank you in the name of the parquet layers. 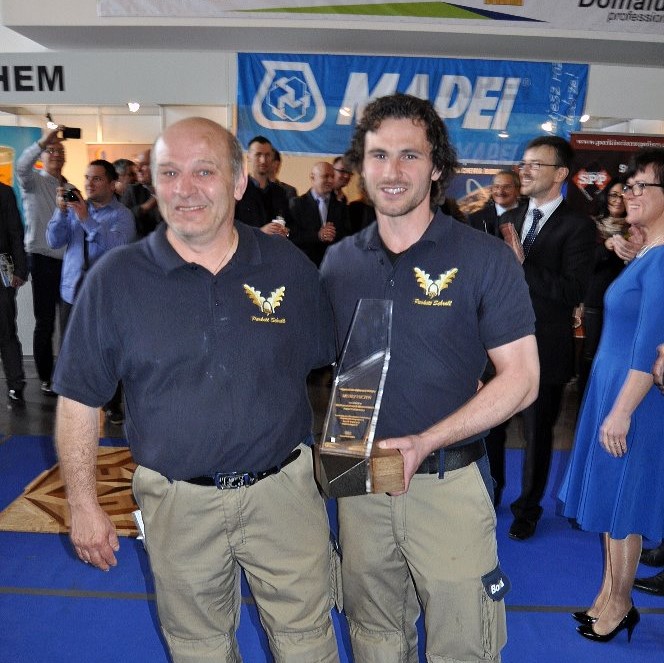